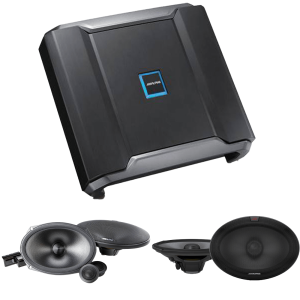 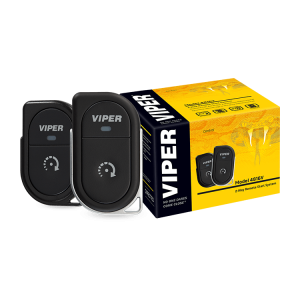 This monthly payment
does not include any applicable tax or interest.
Special Order - Limited Quantities

Alpine R-A60F R-Series amplifiers produce accurate imaging and dependable power. Use them with the R-Series speakers and amplifiers for a loud and fun experience.

This new technology minimizes audible imperfections like excessive phase shift and internal noise which can deteriorate sound quality. With an incredibly low phase shift of 46°, the R-A60F 4-channel amplifier delivers accurate imaging compared to well over 100° of phase shift by a competitive amplifier model. This superior phase curve ensures a proper sound stage among the singers and instruments.

R-Series amplifiers have a built-in bandpass filter which lets you design an active speaker set-up without a separate processor. Improve the sound quality of component speakers by ditching your passive network.  Avoid added phase shifts and power losses by individually powering each component and assigning your own frequency bands for the incredible sound you’re looking for.

The Loudest Family On The Block

Alpine R-S69C.2 6″x9″ Component Speaker System feature a carbon fiber reinforced polymer (CFRP) woofer cone that satisfies a hankering for strong bass response. A deluxe surround allows extended cone movement for high-impact sound as well as resilience in the face of harsh conditions. And the extended frequency range of the separate R-Series CFRP tweeter lets you savor all the rich detail of your high-resolution music files. Alpine includes a pair of external crossovers that are compact enough to easily stash away in most nooks or crannies.

R-Series speakers give you power and control. With an innovative material that delivers more output, the speakers produce dependable performance for a loud and fun experience.
Tech Specs:
TURN IT UP WITHOUT TURNING DOWN SOUND QUALITY
If you play your music loud and want others to know, the R-Series speakers are the match for you. You’ll enjoy a center sound stage with speakers that play loud and clear without distortion. The R-Series speakers are tuned with emphasis on the high- and low-end frequencies, so they deliver power while naturally producing bright, active sound. They are the perfect power and performance match for the R-Series subwoofers and amplifiers.
MORE OUTPUT
The woofers have a large, 35-millimeter (mm) voice coil which allows for more coil windings to fit in the gap. This results in greater heat dissipation and increased power handling, for superior control and output.
The R-Series speakers incorporate Alpine’s patented High-Amplitude Multi-Roll Surround (H.A.M.R.) for control and accuracy. The component models use a crossover with an in-line, passive design and reduced footprint, which contributes to easier installation.
EXCLUSIVE CONE TECHNOLOGY
The R-Series speakers use Alpine’s exclusive cone technology, Carbon Fiber Reinforced Polymer (CFRP), which is a high-strength, lightweight material. CFRP can be custom-formed to that its fibers align in the same direction as the curve and shape of the cone, thereby reducing resonant peaks and increasing the speakers’ mid-bass performance and dynamic range. CFRP is also used as a tweeter diaphragm, enabling the speakers to perform into the 45kHz range and making them compliant with High-Resolution Audio playback.
BETTER FITMENT WITHOUT SACRIFICING MOTOR FORCE
The R-Series speakers use a neodymium magnet which gives them a shorter overall height as compared to other speaker brands. The R-Series speakers also use a new, shallower grill design. The end result? An improved fitment design that lets the R-Series speakers fit into tighter install locations without sacrificing motor force.
Brand Alpine   Model Alpine 162886
Model: Alpine 162886
Product: Alpine R-A60F R-Series 4-Ch Amp | Alpine R-S69C.2 6"x 9" Speakers | Alpine R-S69.2 6"x 9" Speakers – Bundle