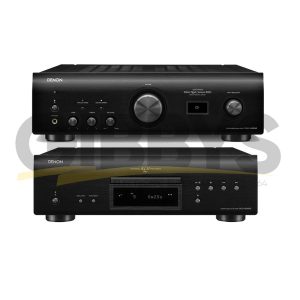 The performance of the Denon PMA-1600NE goes well beyond that of Denon’s previous PMA-1500 series. With its ultimate built-quality, unique Denon technologies and state-of-the-art connectivity, the PMA-1600NE truly is a masterpiece of sound technology.

Thanks to the rear USB-B input and embedded high quality D/A converter, the PMA plays high resolution files up to 384kHz/32bit and DSD up to 11.2MHz from a computer in impeccable sonic quality. For the best performance from analogue inputs, the PMA-1600NE features an Analog Mode which allows to switch off all unutilized sections like the digital input circuitry or the low noise display for an unaltered audio reproduction.

Advanced UHC-MOS is an ideal amplifier whose power supply performance is superior to that of bipolar transistors and incorporates the sound quality advantages of MOS-FETs. The Advanced UHC-MOS is provided in a single push-pull configuration that eliminates deviations in the amplification stage and balances high power with delicate musical details. This circuit masterfully reproduces the full sonic range, from the delicate musical nuances to the powerful climaxes of rich musical expression.

The chassis constructed with 1.0mm thick steel plates protects the signal circuits from external vibration and eliminates the adverse effects of mutual interference among the circuits. The power section has been positioned in the center of the Denon PMA-1600NE. With heat sinks on both sides, this construction of well-balanced mass is in an ideal location to prevent unwanted vibration from affecting sound quality. In addition, the feet supporting the heavy weight of the power transformer, heat sinks, and chassis are made of ABS resin with rigid rib construction.

For digital input, the Denon PMA-1600NE employs Advanced AL32 Processing Plus, the latest version of Denon’s analogue waveform reproduction technology which utilizes unique data interpolation algorithms and also supports high-resolution 384-kHz/32-bit PCM signal input. These algorithms interpolate points that should exist before and after the points in large quantities of data to achieve a smooth waveform that is close to that of the original signal. By carefully restoring data that was lost during digital recording, the resulting playback sound is highly detailed, free of interference, accurately localized, richly expressive in the lower range, and beautifully faithful to the original sound.

The Denon PMA-1600NE is equipped with a high-speed digital isolator to eliminate adverse influences on sound quality caused by high-frequency noise from a USB-connected computer or from the PMA-1600NE’s digital inputs. Since data is transferred magnetically via coils embedded in an IC chip, the input and output sides are electrically isolated. By isolating the signal line between digital audio circuitry and the D/A converter, adverse influences of high-frequency noise on analogue audio circuitry after the D/A converter are eliminated. The Denon PMA-1600NE also adopted a dedicated secondary winding in power transformer for the digital circuitry to shut out noise from the power source. During analogue audio playback, the Analog Mode can be used to turn off power to the dedicated digital power source and completely stop operation of the digital input circuitry to avoid any high frequency influence to the analogue section. Analog Mode also turns off the fluorescent display, allowing the Denon PMA-1600NE to operate as a purely analogue amp (during Analog Mode, USB-B, coaxial digital, and optical digital inputs are disabled).

The Denon PMA-1600NE provides USB-DAC functions that support high-resolution 11.2-MHz DSD and 384-kHz/32-bit PCM input signals. DSD transmission methods support ASIO native playback and DSD Audio over PCM Frames (DoP). Since asynchronous transfer is controlled by the PMA-1600NE’s master clock rather than the clock of a computer the transfer is free of jitter. The D/A converter used in the PMA-1600NE is the same 384-kHz/32-bit and DSD capable top class DAC used in the DCD-1600NE to deliver a clean, high-grade sound.

The PMA-1600NE includes a phono equalizer that supports input from both MM and MC cartridges. This phono equalizer has high gain, and as loops in the circuit board pattern can cause adverse effects on sound quality, the “simple & straight” design represents a significant improvement. On the PMA-1600NE, the MM/MC toggle switch was changed from a push type to a relay type, which shortens the pattern on the circuit board and makes signal loops smaller, allowing delicate analogue signals to be amplified with greater purity.

The PMA-1600NE comes with a system remote control unit that can also operate the DCD-1600NE and other Denon CD players. The low noise FL display on the product front panel gives source and sample rate indication.

The Denon DCD-1600NE focuses on achieving the essence of a disc player: ultra-high precision in reading discs and supplying high-quality audio signals to the amp. To achieve this, the signal paths are as short as possible and the whole circuitry is minimized.

The engineers also redesigned the disc drive mechanism brackets and the chassis to eliminate vibration, the great enemy of disc players, and achieve ultra-vibration-resistant performance. The information on the disc is now read with impeccable accuracy and a clean, high-grade signal is supplied to the DCD-1600NE’s Advanced AL32 Processing Plus circuitry. Besides CD and Super Audio CD playback, the DCD features playback of audio recordings up to PCM192/24 or DSD5.6 recorded on a DVD R/RW for full flexibility and extended access to high resolution audio.

The Denon DCD-1600NE is equipped with Advanced AL32 Processing Plus, the latest version of Denon’s analogue waveform reproduction technology which utilizes unique data interpolation algorithms and also supports high-resolution sound sources. These algorithms interpolate points that should exist before and after the points in large quantities of data to achieve a smooth waveform that is close to that of the original signal. By carefully restoring data that was lost during digital recording, the resulting playback sound is highly detailed, free of interference, accurately localized, richly expressive in the lower range, and beautifully faithful to the original sound.

The Denon DCD-1600NE’s disc drive design contains high-class S.V.H. (Suppress Vibration Hybrid) Mechanism. The circuitry that controls the pickup and decodes the signals read from the disc has been newly developed. Signal paths have been shortened to an absolute minimum and circuits have been miniaturized to ensure that excess current or noise will not occur.

An S.V.H. Loader of a hybrid construction combining different materials gives stability to the disc drive so that the disc can be read with utmost accuracy. In addition, the mechanism’s low center of gravity suppresses any vibration occurring inside the mechanism due to disc rotation, and the mechanism structure also effectively suppresses external vibration. By eliminating unwanted vibration, servo-related operations are minimized, and by also minimizing unnecessary controls and current consumption, digital signals can be read from the disc with optimum accuracy under stable conditions.

In addition to CD and Super Audio CD, the Denon DCD-1600NE can play DSD (2.8 Mhz / 5.6 MHz) files and high-resolution files up to 192 kHz / 24 bits recorded on DVD-R/RW and DVD+R/RW discs. Music files with sampling frequencies of up to 48 kHz recorded on CD-R/RW discs can also be played.

The integrity of musical signals deteriorates when they are subject to internal vibration caused by disc rotation or the power transformer, or to airborne vibration caused by sound pressure from the speakers. To guard against such influences, Denon engineers designed a vibration suppression structure they called “Direct Mechanical Ground Construction”. In this design, the power transformers – themselves a source of vibration – have been placed close to the feet of the Denon DCD-1600NE where unwanted vibration is funneled directly to the ground and prevented from affecting nearby circuitry. Also, by placing the drive mechanism – the part with the greatest mass – low in the center of the chassis, the low center of gravity effectively absorbs internal vibration caused by disc rotation and also protects the mechanism from external vibration.

To accurately synchronize digital circuits, the Denon DCD-1600NE’s DAC Master Clock Design treats the DAC as the master when clock signals are supplied. Positioning the master clock immediately adjacent to the D/A converter (DAC) suppresses jitter and ensures optimum precision in D/A conversion. In addition, the quality of the clock, which becomes the reference for semiconductor operation, is extremely important for ensuring that the digital audio circuitry performs at its maximum potential. The DCD-1600NE thus employs a clock oscillator to dramatically reduce phase noise that is the displacement of frequencies. The clock power circuit has also been vastly improved to bring out the full potential of the high-quality clock’s performance. A conductive polymer capacitor with particularly outstanding high-frequency impedance characteristics for Denon’s renowned sound quality has been placed at the base of the clock’s power source, and an ultra-compact film capacitor that is different from layered ceramic capacitors has been placed close to the clock, to achieve an improved S/N ratio and a transparent sound with superior spatial expression. The Denon DCD-1600NE is equipped with two clock oscillators, one for each sampling frequency (44.1 kHz and 48 kHz), that can be switched between the frequencies to thoroughly suppress jitter.

The “simple & straight” design philosophy has been thoroughly implemented in all of the Denon DCD-1600NE’s circuits. Circuit patterns have been redesigned from the ground up to make signal paths as short as possible and ensure that the original sound is faithfully reproduced across the sonic spectrum. As a result, interference between circuits and between left and right channels as well as adverse influences on audio signals are minimized, producing a clean, highly transparent sound. Moreover, the power units for the digital and analogue circuits, whose signals have different characteristics, have separate transformers to eliminate mutual interference and noise. An aluminum plate has also been combined to the underside of the steel transformer base to strengthen rigidity.