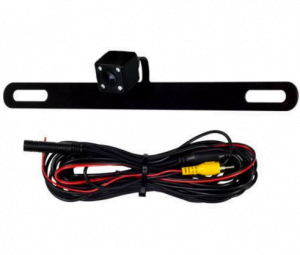 Backup systems fall into two categories: sensors and cameras. Sensors placed on bumpers use technologies such as ultrasound, lasers, and radar to sense objects around the car and then sound a warning when you come too close. Some also offer visual warnings in the form of an in-dash LED display.

Backup cameras, on the other hand, are mounted on the back of the vehicle (sometimes in the license plate frame), and display an image on a monitor, much like your rear-view mirror.

Both cameras and sensors are also used for help with parallel parking. In fact, soon vehicles will be able to park themselves. If you’re interested in driving more safely today, a backup sensor or camera will alert you to objects behind you, and can also be used for help parking.

TE-BPCIR Rear view cameras are typically mounted on the back of the vehicle and offer wide-angle lenses that help you see everything from the left to right bumper of your car. They’re angled to the ground, so you can see the road behind you, as well as any children or objects in the way. According to the NHTSA, such camera systems have the best potential to reduce backover accidents out of any vehicle sensory technology they have tested.

Backup sensors or parking assistance devices are built to withstand weather, but neither they nor backup cameras are foolproof. The systems are highly reliable, but extreme weather conditions such as fog, snow, heavy rain, or even sun glare can reduce their effectiveness. Don’t rely on the devices alone; use them to enhance your driving skills. Nothing replaces driver responsibility and good sense.