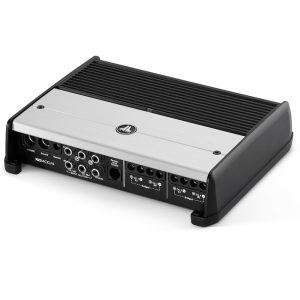 The JL Audio XD400/4v2 4-Channel Car Amplifier packs a serious full-range punch, delivering a staggering 100 watts to each of its four channels into 2 ohms (14.4V, 1% THD). The breakthrough that makes this much power possible in such a small chassis is our NexD™ ultra-high-speed switching design, which allows for full bandwidth Class D operation with extremely low distortion and outstanding efficiency.

Use the JL Audio XD400/4v2 in combination with our XD600/1 monoblock to build a 1000 W amplification system to power four satellites and a subwoofer… and fit the whole thing under a seat. Or, use the XD400/4v2 by itself to power two satellites, plus a subwoofer. With XD’s, the possibilities are endless. The XD400/4v2 includes a 12 dB / octave filter for each channel bank, which can be configured as a low-pass or high-pass filter and offers continuously variable cutoff frequency selection from 50-500 Hz.

The XD400/4v2 also features the v2 Spec feature set, which consists of automatic turn-on capability (via signal sensing or DC-offset sensing), and a dual-range differential-balanced input section able to handle a wide range of input voltage levels. With the addition of an HD-RLC remote level control (sold separately), the amplifier’s level can be directly controlled from the driver’s seat. This amplifier features a black powder-coat finish and a gasketed, brushed aluminum cover for the controls.

JL Audio’s XD400/4v2 amp packs a wallop far beyond what you’d expect from something so small. This compact amp plays your music with true fidelity and impressive impact, without straining your car’s electrical system, thanks to JL Audio’s proprietary NexD™ amplifier technology. A cast alloy heatsink and an advanced cooling system keep this amp at optimal temperature, eliminating thermal shut-downs so your music keeps going strong without interruption.

The XD400/4v2 can deliver 75 watts RMS each to 4 full-range speakers, or you can bridge the amp to 2-channel mode to send 200 watts each to a pair of subs. You can also run two speakers with the front channels while driving a subwoofer with 200 watts RMS from the rear channels bridged together.

Works With Almost Any Vehicle’s System

“Differential-balanced” inputs keep the signals clear of outside noise, and allow you to connect this amp to just about any in-dash stereo, even a factory radio. The speaker-level inputs feature two auto turn-on modes so you can readily incorporate this amp into a factory system — no need for RCA connections or a remote turn-on lead. An optional wired remote lets you tweak the volume of the whole system from your front seat, or you can switch to the rear channels only, which is handy if you’re using them to drive a sub.