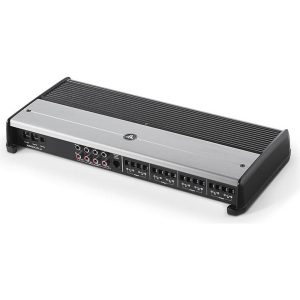 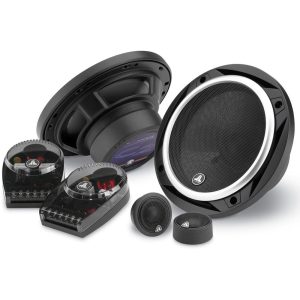 The JL Audio XD800/8v2 is the industry’s first Class D amplifier to offer eight channels of full-range output capability and is capable of delivering a staggering 100 watts to each of its eight channels @ 2 ohms (14.4V, 1% THD). The XD800/8v2’s breakthrough that makes this much power possible in such a small chassis is our NexD™ ultra-high-speed switching design, which allows for full bandwidth Class D operation with extremely low distortion and outstanding efficiency.

The JL Audio XD800/8v2 includes a 12 dB / octave filter for each channel bank, which can be configured as a low-pass or high-pass filter, and offers continuously variable cutoff frequency selection from 50-500 Hz.

The JL Audio XD800/8v2 also features the v2 Spec feature set, which consists of automatic turn-on capability (via signal sensing or DC-offset sensing), and a dual-range differential-balanced input section able to handle a wide range of input voltage levels. With the addition of an HD-RLC remote level control (sold separately), you have the ability to control the level of two, four, or all eight of the amplifier’s channel levels from the driver’s seat.

This amplifier features a black powder-coat finish and a gasketed, brushed aluminum cover for the controls. 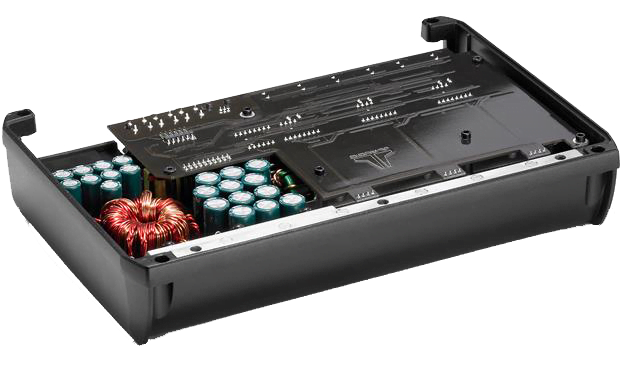 Beginning with the original ‘Slash’ subwoofer amplifiers, JL Audio has been at the forefront of Class D amplifier design. Today, our flagship Single-Cycle Control™ technology sets the ultimate standard for Class D amplifier performance. The NexD™ amplifiers may be a bit less complex, more compact and more affordable, but they flow from the same minds that have set the trend in mobile amplifier technology for over a decade.

Let’s get a little nerdy… A traditional PWM switching amp design uses a fixed switching frequency and varies the pulse width based solely on the audio input signal to the pulse modulator. This basic approach assumes some ideal conditions, like a rock-steady power supply, that do not necessarily occur in a real, in-car installation. Power supply sag with signal causes distortion at all power levels with these designs, even well below clipping. The cure for this is feedback (a corrective signal sent back to the input side), but this becomes impractical as the audio frequency increases, making it a good solution for band-limited (subwoofer) amps, but not for full-range amplifiers.

Taking the above into account when designing the NexD™ subwoofer amplifiers, we have taken the simple fixed PWM approach and enhanced it with a very high switching frequency: 240 kHz, which is about 4x higher than most Class D subwoofer amplifiers. This pushes the amplifier’s bandwidth to at least 500 Hz with minimal distortion and improves efficiency, while keeping typically bulky circuity more compact. Your subwoofers will reward you with tight, rock-solid bass performance.

For the full-range NexD™ amplifiers and channels we applied a variable, ultra-high speed version of the NexD™ technology (switching at well over 400 kHz). In these designs, a self-oscillating modulator with “feed-forward” sends information about the instantaneous power supply voltage to the modulator, combining this with the input signal to cancel out any distortion due to supply voltage fluctuation. This reduces distortion prior to applying feedback, simplifying the overall feedback loop design.

Should a JL Audio amplifier equipped with Advanced Rollback Protection reach an unsafe operating temperature, a special circuit rolls back peak power output, without changing gain, until the amplifier cools down to a safe operating temperature. The red “Thermal” LED will light to indicate this condition has been reached. Once the amplifier cools down, the circuit restores full peak power output and the red “Thermal” indicator reverts to its normal state. The operation of Advanced Rollback Protection is inaudible in most cases, but it ensures that your music keeps on playing, even under the most demanding conditions.

JL Audio’s XD800/8v2 amp packs a wallop far beyond what you’d expect from something so small. This compact 8-channel amp plays your music with true fidelity and impressive impact, without straining your car’s electrical system. A cast alloy heatsink and an advanced cooling system keep this amp at optimal temperature, eliminating thermal shut-downs so your music keeps going strong without interruption.

You can set up this versatile amp for just about any system so you’ll never outgrow it, no matter how your audio plans may change. It can:

High- and low-pass filters on every channel give you intimate control over the character of your sound. “Differential-balanced” inputs keep the signals clear of outside noise, and allow you to connect this amp to just about any in-dash stereo, even a factory radio with no preamp outputs. An optional wired remote lets you tweak the level from your front seat.