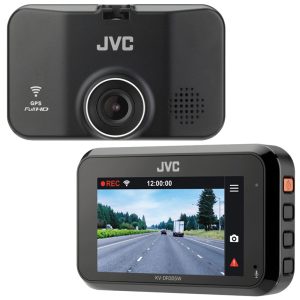 Great resolution, on the go

Documenting an accident is all about the details, and JVC KV-DR305W dash cam is the best tool for the job. With Full HD recording capability and Wide Dynamic Range (WDR) for a clear image night or day, this dash cam makes image quality the top priority. It loop-records the road ahead and, with a wireless connection to your smartphone via Wi-Fi, accessing and sharing your video files is a snap. The camera also comes with a 16GB microSD card for storage, a car charger, and an adhesive-backed mount with quick-release functionality.

JVC KV-DR305w built-in 3-axis G-Sensor detects hard braking or a collision, and then saves vital video files for a complete record of the event. Built-in GPS geo-tags your files with latitude, longitude, date, time, speed, and direction of travel in order to provide a more complete presentation. You can easily access all of that gathered information using JVC’s DVR Link App downloaded to your phone.

The built-in WDR (Wide Dynamic Range) helps to reduce headlight glare or shadows that may occur in high contrast situations, such as in a backlit environment, or near the entrance or exit of a tunnel.

The JVC KV-DR305W offers three recording modes to accommodate various situations. 1: “Continuous Recording*” to automatically record and stop in conjunction with the engine ON/OFF, 2: “Manual Recording” to start recording anytime you want and save it as data that cannot be overwritten, and 3: “Event Recording” to automatically start recording when a sudden impact or a sudden speed change is detected by the “G-Force sensor”.

The G-Force Sensor is built-in to detect impact to the vehicle body. Its 3-axis sensor is able to detect sudden movements from three directions: front/back, left/right, and top/bottom.

The JVC KV-DR305W is also equipped with a GPS system that measures your vehicle’s location information such as speed, latitude, and longitude. The driving record can be displayed on the dedicated PC linked software.

The JVC KV-DR305W features a wide angle lens of 114°. With a secured wide-angle view, you can judge the occurrence of an accident more objectively. The F2.0 lens performance assures precise, high-quality images.