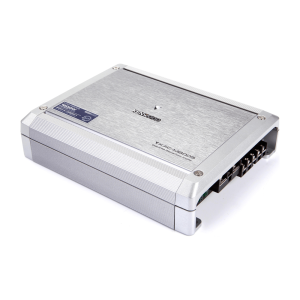 The Kenwood KAC-M8005 has a MAX Power of 1600W, featuring conformal coating and speaker level input. It also has a variable high-pass and low-pass filter.

The Kenwood KAC-M8005 will accept an input signal from almost any source, regardless if you’re using RCA cables or speaker wires from your radio. When you use the speaker-level inputs, the amplifier will sense the signal and turn itself on, so you won’t need to run a remote turn-on lead to your receiver.

High-pass filters on the front and rear channels let you tailor the sound to get maximum performance from your speakers. You can adjust the low-pass filter and bass boost on the subwoofer channel to get just the right tone for your bass, while optimizing your sub’s performance.

Conformal coating protects the internal circuits from water and dirt, so the show will always go on, even through the roughest conditions on road, trail, or waterway. The speaker output terminals feature plastic-covered plugs that provide even more protection for those connections.