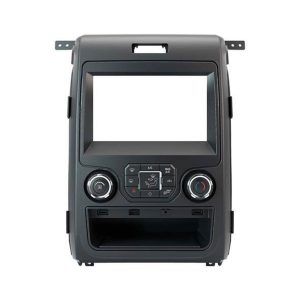 Your 2013-2014 Ford F150 with a 4.3″ screen is an excellent vehicle but it is difficult to replace the factory radio due to the console. You can install a double-DIN (4-inch) aftermarket device using this iDatalink KIT-F150 dash kit “receiver in the dash panel that is tall). The kit’s climate controls have a factory-like appearance and are the ideal match for the colour, texture, and shapes of your dash. You will receive an easy-to-use pocket with flush-mounted HDMI, auxiliary, and USB ports that link to your new radio.

Required Module For This Installation

To finish this installation and keep your steering wheel audio controls, you’ll need the Maestro ADS-MRR module (not included). The Maestro adapter and the factory wiring harness for your F-150 are connected to the KIT-F150 using straightforward plug-in connectors.

Features That have Been Retained

This bundle keeps your backup camera and factory amplifier (if it has them) with any car stereo. Install an Alpine, JVC, Kenwood, or Pioneer iDatalink-compatible vehicle radio and your truck’s SYNC capabilities, including as hands-free calling and music streaming, will remain functional.

You may check your tire pressure, battery voltage, and “door ajar” warnings using the touchscreen on your receiver if it is iDatalink compatible. Additionally, you can select which gauges you want to see on the screen, and when a warning light illuminates, you can even check the engine codes.

Note: The only features that remain when installing an aftermarket head unit without an iDatalink Serial Port are the amplifier turn-on and steering wheel control.

Ford F150 OEM Integration Dash Kit & Vehicle Harness: The iDatalink Maestro KIT-F150 is an OEM integration dash kit and vehicle harness made exclusively for 2013-2014 Ford F150s with the 4.3-inch “My Ford” factory radio. It is compatible with these models. Using the Maestro RR or RR2 Car Radio Replacement Interface module, the K150 enables you to swap out the “My Ford” factory radio of your 2013–2014 Ford F150 for another aftermarket head unit or head unit that is compatible with the iDatalink Serial Port (sold separately).

Vehicle Harness: The iDatalink Maestro KIT-F150 comes with a vehicle harness that fits into the iDatalink Maestro RR or Rr2 interface module (available separately), connects to the factory radio harness in your car and is hardwired to the harness of your brand-new aftermarket Double-DIN receiver. Three Molex connections from the installation harness plug into the OEM radio harness of your Ford F150. Four multi-pin connections on the other end of the harness connect to the Maestro RR or RR2 interface module (sold separately). Additionally, a backup camera harness with a composite video connector is available, enabling you to keep the original backup camera that came with your vehicle.