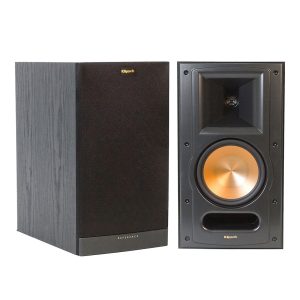 This is an open box - Please read our policy

Klipsch® designed their impressive Klipsch RB-61 to deliver the same kind of thrills and intensity as their larger tower speakers — you’ll be amazed at the kind of sound these put out. Building on Klipsch’s previous Reference speaker line, the Series II models have updated drivers and a new crossover system for even more spacious sound. These bookshelf speakers work equally well as a stereo pair for music listening or as the front left and right speakers in your home theater system.

Klipsch RB-61 speakers feature a redesigned version of Klipsch’s famous horn-loaded tweeter. It disperses the highs evenly across your listening area in a 90°-wide, 60°-high pattern. With their Series II speakers, Klipsch has redesigned the shape and slope of the horn, so your movie soundtracks and music will sound more open, with improved dynamics and efficiency. All in all, you can count on powerful, “front row” sound that’s crystal-clear at all volume levels.

The Klipsch RB-61 also use light, rigid Cerametallic woofers. They feature a folded edge to produce smoother mids and tighter bass. The specially treated aluminum in the cones helps to dampen unwanted vibrations and distortion, while an integrated dustcap gives them a clean look and adds stability. Dual five-way binding posts let you bi-amp or bi-wire these speakers for even better performance.

Now in its fifth generation, Reference II speakers boast enhanced features, including re-engineered drivers and a new crossover system, to capture your attention and excite your emotions. In addition to the improved sound quality, the look of “big sound” has been redefined throughout the line with sophisticated cabinetry, refreshed logos and rounded feet.

Four Laws Of The Klipsch Universe

Beginning in 1946, company founder, Paul W. Klipsch believed four principles to be the foundation for great sound. Together, these four design principles—high efficiency with low distortion, controlled directivity, flat frequency response, and wide dynamic range—have and always will be the foundation for our stunningly powerful and precise sound.