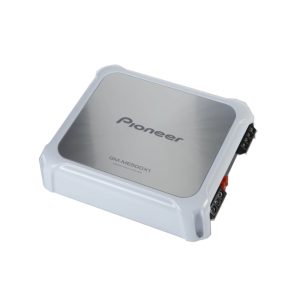 Pioneer’s GM-ME500X1 is a Marine grade Class-D digital amplifier specifically designed for the marine environment, including features such as special painting, protective covers for the side panels and RCA terminal covers.

For extra flexibility, easy installation is guaranteed thank to “Automatic Signal Sensing and Turn-On”, which automatically detects an input signal and turns the amplifier on and off when connected via the speaker line input.

The GM-ME500X1 has a sleek design thanks to its white cosmetics and hairline top plate enhancing the high quality sense of design and a total of 1600W.

Big bass in the sea

It takes a lot of amplifier power for your bass notes to be heard clearly over the sounds of the waves, wind, and engine noise. Pioneer’s ME-Series GM-ME500X1 mono marine subwoofer amplifier can put out up to 800 watts RMS, enough for everyone in and around your boat to feel the beat.

This amplifier’s output power matches up nicely with Pioneer’s ME-Series TS-ME100WS and TS-ME100WC marine subwoofers, allowing you to build up a large system by adding one sub at a time. When running one sub, the amp puts out 300 watts RMS, exactly the power rating of the sub. With two subs, the amp sends out 500 watts RMS total, 250 watts to each sub. With three of them, it delivers about 700 watts RMS, about 233 watts per sub. And with four, it produces a whopping 800 watts RMS, 200 per sub. Not bad for one little amp.

The GM-ME500X1 features a low-pass and a subsonic filter to tune the bass tones to match your subs and make them sound good. Conformal coated circuit boards and rubber connection/control covers keep water and dirt away from sensitive areas.

CTA-2006 Compliant: CTA-2006 is a system of testing and measurement for mobile audio amplifiers. This voluntary standard advocates a uniform method for measuring an amplifier’s RMS power output and signal-to-noise ratio. The criteria for measuring amplifier power uses a DC input voltage of 14.4 volts and the RMS power output is measured over a frequency range of 20 Hz to 20 kHz (for full range amplifiers), with 1% or less Total Harmonic Distortion plus noise (THD+N). Signal-to-Noise ratio is measured in weighted absolute decibels (dBA) at a reference of 1 watt into 4 ohms. CTA-2006 standards allow consumers to compare amplifiers and receivers under the same conditions (apples to apples).

Pre-Output: An additional pair of RCA jacks provides a line level output for sending a signal to another amplifier. The output matches the signal at input, and is not affected by the amplifier’s crossover.