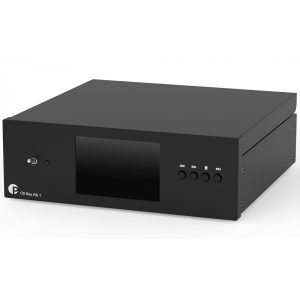 The Pro-Ject PJ82382595 CD Box RS2 T CD Player. Pro-Ject has always been making products and investments which are not particularly mainstream. As everybody was jumping onto the CD bandwagon, we were starting with turntables! Now as everybody moves into streaming, we are investing in a new revolutionary CD-player. We believe in listening to music consciously and also that there are many people who deeply share this sentiment with us.

Similar to analogue records, people want to have the physical medium in hand. And that‘s also true for the CD! Most of us are still going to put most of their CD‘s onto a hard disc drive or store them in the basement, as they did with their analogue records. But many want to keep their best CD’s and for this they want to have a proper CD-player.

The Pro-Ject PJ82382595 CD Box RS2 T, Very good in quality, but not too crazy expensive. Actual Redbook CD players have gotten rare, real high-end mechanisms aren‘t even existing anymore. Today, we know that the drive is essential for accurately reading CDs. The mechanics in many drives struggle to correctly read CDs and rely on audio interpolation to make it work, that often has a negativ impacting on the sound quality.

The CD medium might have gotten an unfavorable reputation as a result, which is why it is time to create a perfect, top-class CD transport again. Transport-only matters, because many already have a very good DAC, which means we do not have to add a DAC and drive costs up. So we concentrated to make the best CD transport we possibly could.

Being based in Vienna, we are lucky enough that Philips had its development department here, and many CD players and mechanisms were designed here. The gentlemen who were part of this epochal invention are still around, formed in a company called StreamUnlimited. We are proud to say, the pope of the CD player today – Mr. Michael Jirousek, was helping to create this ultimate Pro-Ject PJ82382595 CD player.