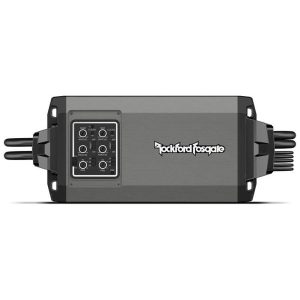 The Rockford Fosgate M5-800X4 amplifier features the next level of Element Ready design that’s built as rugged as the outdoor environment it’s used in. The IPX6 rating is provided by splash guards on both ends and heavy-duty molded harnesses with integral sealing gaskets. A new preset switch – for use with Rockford Fosgate UTV audio kits – eliminates the need to set-up and tune the amp for the best experience possible.

Rockford Fosgate amplifiers are known world-wide for producing more power than their ratings suggest. The M5 amplifiers are the first series based on new industry standard Dynamic Power ratings, bringing their conservative ratings to the forefront.  Consider Continuous Power as wattage developed on the test bench for comparison against other amplifiers in the same class, and Dynamic Power as real-world wattage when connected to a speaker load, listening to music. Either way you look at it, Rockford Fosgate is proving – once again – these amplifiers are powerful enough to drive any speaker or subwoofer you throw at them.

Rockford Fosgate designed this M5 Series amplifier for marine and powersports environments, using a special “Element Ready” chassis and conformal-coated PC boards to protect against dust and water. The Rockford Fosgate M5-800X4 amplifier delivers 100 watts RMS to each of your four speakers, with a Dynamic Power rating of 200 watts per channel at 2 ohms. Bridge the amp to 2-channel operation, and you can power a pair of subs with 200 watts apiece. You can adjust the high- and low-pass filters and Rockford Fosgate’s famous Punch EQ to get the best possible sound from your speakers or subs. Built on the popular TM series, M5 amplifiers feature the same great technologies like Constant Power, Class-AD and C.L.E.A.N., all engineered, developed, and validated in Tempe, Arizona.

Ready for the outdoors

The Rockford Fosgate M5-800X4 amplifier features a UV-stable, powder-coated, cast-aluminum heatsink to help prevent corrosion, while heavy-duty molded connectors protect wiring, keeping out water and dirt. In fact, this amp earned its IPX6 water intrusion rating after being sprayed with 100 liters of water per minute from a distance of 10 feet from all directions for at least 3 minutes. Translation? This amp will deliver reliable power through all kinds of abuse, whether it’s out on the water or deep in the wilderness.

Set it up for optimum performance

Rockford Fosgate’s C.L.E.A.N. technology (Calibrated Level Eliminates Audible Noise) setup system ensures your music will sound as clean and powerful as possible. It’s a simple system to use — turn it up until the light shows red, then turn it down until the red light goes out. If you’re adding this amp to a Rockford Fosgate UTV audio kit, just press the Preset button and it’s instantly tuned for maximum performance.