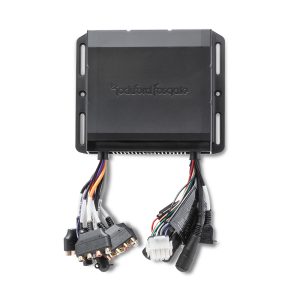 The PMX-8BB is a hide-away digital media receiver black box designed for use with the PMX-8DH controller. Uses PMX-CAN to connect to Raymarine MFD (Multi-Function Display) systems with CANbus functionality.

The brains behind the operation

The PMX-8BB “black box” digital media receiver was created by Rockford Fosgate to work with their PMX-8DH controller. You’ll have a convenient, powerful system that will keep you and your crew entertained with this compact unit tucked away below and the PMX-8DH on your dash.

It’s simple to make your smartphone the centre of your marine media system thanks to built-in Bluetooth and simple, secure pairing. It connects to your Apple or Android phone (see below) and allows you to listen to your stored music or Pandora playlists. You can also listen to radio stations on terrestrial AM/FM or Weatherband.

You can listen to terrestrial AM/FM or Weatherband radio stations, or you can add a satellite radio tuner to enjoy SiriusXM’s fantastic programming even when you’re thousands of miles away.

There are four different listening zones.

The PMX-8BB allows you to control four different zones on your boat. Selectable high-pass and low-pass filters, crossover slopes (12 dB or 24 dB), and dedicated DSP audio processors with independent 7-band EQs and Rockford Fosgate’s Plus EQ are included in each zone. The built-in 4-channel amp has an RMS output of 25 watts per channel.

When the power is turned off during the off-season, the Electrically Erasable Programmable Read-Only Memory (EEPROM), a type of non-volatile memory, will keep everything safe.

The PMX-8DH controls the majority of the PMX-8BB’s functions, but you can also add up to three Rockford Fosgate remote controls. One for the bow, one for the swim platform, and one for the lower deck. It all depends on the size of your boat and the number of controllers you require.

You can also connect a rear-view camera to the receiver to see what’s behind you as you back into a slip, which is an excellent feature for any boat, but especially larger ones.

An IR remote control input and a wired illumination control input are also available. A Rockford Fosgate CAN-BUS transceiver, which connects this receiver to your Multi-Function Display (MFD) system, is also available. The USB port on the back of the device can be used to charge it as well as install firmware and Bluetooth software updates.

Built to withstand the elements while boating

Of course, the PMX-8BB’s hideaway design keeps it out of the elements, but life on a boat is still a damp, humid existence. Rockford equips this water-resistant receiver with a conformal coated circuit board to ensure all-season dependability, ensuring that it will keep rocking for years to come. It has an IPX5 water intrusion rating, which means it’s resistant to moisture and the odd stray blast of water.

This marine digital media receiver will not play CDs.