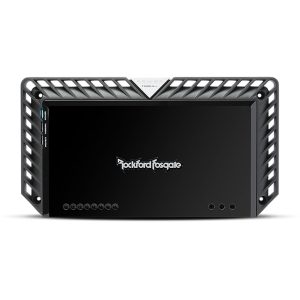 The Rockford Fosgate T1000-4AD is a full-range 4-channel amplifier boasting 1,000 watts of power. This amp produces sound quality characteristics of Class-A designs with the efficiency of a Class-D, making it an ideal choice for anyone looking for an efficient, high-powered amplifier.

T1000-4AD is perfect for anyone looking for an audiophile-grade amplifier that can power their entire system. This amplifier has a class-AD design, which means that you’ll get crystal-clear sound with less distortion than traditional amps. Plus, the 4-channel setup lets you hook up multiple speakers and subs for an unbeatable listening experience.

Rockford Fosgate’s high-tech solutions yield more power. Power Series amplifiers actively monitor their speakers’ performance, ensuring that you always get the most out of your audio system. Constant Power technology guarantees that your music will always sound its best, no matter how loud you play it.

Rockford Fosgate combined analog and switching technologies (Class AD) to produce this highly efficient, full-range amplifier that has very low distortion. It’s also stable down to one-ohm per channel, so you can be sure even low-impedance speaker systems will play safely, as well as loudly.

Power Series amps use Rockford Fosgate’s patented, award-winning “Dynamic Thermal Management,” a 3-stage cooling system that uses forced air to dissipate heat evenly across the amp and out through the large heatsinks. This results in cooler internal components, higher efficiency, and lower distortion.

“Differential Input” circuitry helps eliminate any electronically induced noise or hum that could be picked up by the input cables, allowing only clean signals to enter the amplifier. You get more music with less heat and noise in a stylish package that’s up to 40% smaller than previous models.

Rockford Fosgate T1000-4AD amp’s bigger than its size. Four channels of 250 RMS watts is enough to take most SPL speakers to their extreme limits. Or you can bridge your T1000-4ad to blast 500 watts each to a pair of subwoofers. Either way, you can depend on plenty of clean, powerful sound from your Power Series amp.