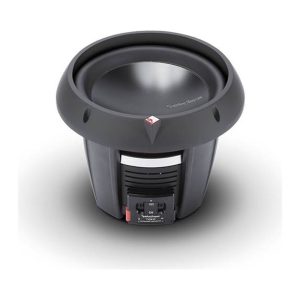 The T1D410 subwoofer features innovative technology that allow it to perform like a larger woofer than its predecessor. The T1 10″ has two 4-Ohm voice coils, 600 Watts RMS power handling, and an integrated trim ring. The Rockford Fosgate Power Series T1D410 Dual 4-Ohm subwoofer incorporates cutting-edge new Rockford Fosgate technologies. The T1D410 features unique VAST technology, which increases surface cone area by up to 25% over the previous model, giving it the performance of a much larger woofer. The new FlexFit basket not only looks the part, but it also gives you a lot of versatility in terms of installation. The T1D410 is here, clean, high-tech, and ready to set off vehicle alarms!

Bass Beats That Draw A Crowd

Power Series subs were designed by Rockford Fosgate for ultimate high-power, high-volume bass. A responsive paper cone is strengthened with the same Kevlar® fibres used in bulletproof vests, and a hard anodized aluminium dust cap covers and protects the entire cone in the T1D410, displaying the glossy Rockford Fosgate emblem. What’s the end result? From a nearly unbreakable cone, you get pure warm bass.

The enlarged rubber surround is attached to the cone using Rockford Fosgate’s patent-pending VAST technology, which increases usable cone area by 25%, allowing this sub to push more air for even more bass.

Trip Of a lifetime

Impedance Selection Secured By A Fuse

Power Series subs such as the T1D410 are equipped with Rockford Fosgate’s innovative SWIFTTM terminals, which allow you to design exactly the system you want – high-power or multi-sub — without having to deal with intricate wiring. To choose between 2 and 8 ohms, simply rotate the impedance selection jumper. This impedance selector makes it easier to reconfigure your system if you decide to add another sub later. The jumper is additionally fused to prevent inadvertent overloading of your sub. You may use these subs in either a sealed or ported enclosure, so you can get the bass you want for your system.

Available Wiring Diagrams For The T1D410