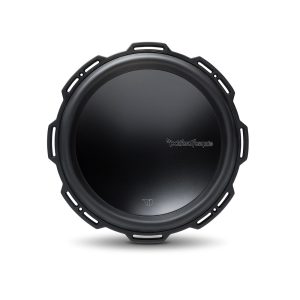 Rockford Fosgate T1D415 Power Series subs were designed by Rockford Fosgate for ultimate high-power, high-volume bass. Whether you’re putting together a system for serious competition or simply to satisfy your taste for terrific bass, these subs produce massive low-frequency reproduction that’s as authentic as it gets.

More bass with a radial heat sink and a longer excursion

A radial heat sink is attached directly to the top of the magnet construction of the Power Series Rockford Fosgate T1D415 15″ subwoofer. This unique copper heat sink directs heat away from the voice coils, keeping them cooler and more efficient. It also protects the voice coils from stray magnetic energy, which can cause performance issues. That’s all well and good, but what does it mean to you? It means you’ll be able to handle more power and produce greater bass, which is a good thing. The heavy cast aluminium frame of the sub provides a sturdy foundation for extreme cone excursion, while the expanded pole piece and raised backplate allow the sub to hit deeper lows without “bottoming out.”

Bass beats that draw a crowd

A hard anodized aluminum dust cap covers and protects the entire cone, displaying the glossy Rockford Fosgate emblem. This Rockford Fosgate T1D415 sub has a responsive paper cone reinforced with Kevlar® fibres (also used in bulletproof vests). The result is classic warm bass from an almost unbreakable cone. The enlarged rubber surround is attached to the cone using a novel technique that improves available cone area by 25%, allowing this sub to push more air for even more bass.

Impedance selection secured by a fuse

The SWIFTTM terminals on Rockford Fosgate’s Power Series subs allow you to design exactly the system you want – high-power or multi-sub — without having to worry about intricate cabling. To securely pick 1 or 4 ohms, simply rotate the impedance selection jumper. The jumper is also fused to prevent inadvertent overload on your sub. This sub makes it easier to reconfigure your system if you decide to add another sub in the future. You can use these subs in a sealed or ported enclosure to get the bass you desire for your system.

The Rockford Fosgate T1D415 subwoofer has two 2-ohm voice coils with a jumper to quickly wire them in series or parallel; the voice coils cannot be wired independently.