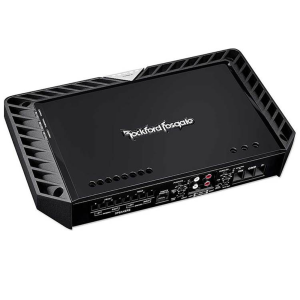 The Rockford Fosgate T400-4 amplifier puts out 60 watts RMS into each of its four channels — more than enough to drive your front and rear speakers to their musical peaks. Or you can bridge your T400-4 to blast 200 watts each to a pair of subwoofers. Either way, you can depend on clean, powerful sound from your Power Series amp.

MEHSA is a Rockford Fosgate proprietary process that increases the heat transfer from the MOSFET devices to the heatsink. This allows the heat to escape more readily from the amplifier, so that the transistors stay cooler.

Rockford Fosgate T400-4 differential Input circuitry helps eliminate any electronically induced noise or hum that could be picked up by the input cables, allowing only clean signals to enter the amplifier. You get more music with less heat and noise in a stylish package that’s up to 40% smaller than previous models.

The cast aluminum heatsink dissipates heat generated by the amplifier’s circuitry. The inherent advantage of casting provides a 30% improvement of cooling over conventional extrusion heatsink designs.