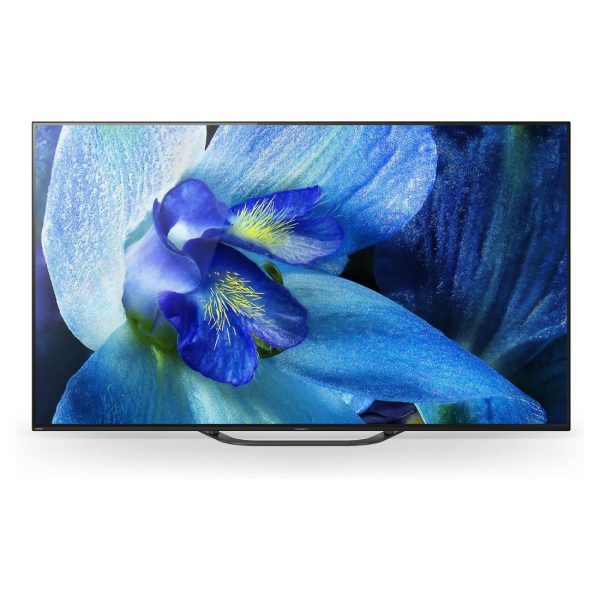 Sony XBR-55A8G 4K provides four times the picture detail of 1080p HD, while HDR (High Dynamic Range) gives a major boost to contrast and color. It may surprise you, but HD video standards are based on old-school tube TVs with low brightness capabilities.

The latest HDR-equipped TVs, like the XBR-55A8G, can display greater contrast and a wider color spectrum. The combination makes pictures pop like you’ve never seen before.

Instead of using typical tiny speakers, the XBR-55A8G uses the entire screen to generate sound. Sony’s Acoustic Surface™ technology uses actuators on the back to send vibrations through the screen to produce sound. Sounds are localized to what’s happening on screen, creating an even more immersive experience. A total of 50 watts of power drives the screen speaker system as well as the rear-mounted woofer.

The XBR-55A8G’s built-in Android operating system lets you easily log in to your Google ID to access a huge collection of apps, games and content from Google Play. Use the Chromecast Built-in feature to stream movies, pictures, and TV shows from your iOS or Android-based phone, or from a laptop.

The Sony XBR-55A8G included remote control lets you activate the built-in Google Assistant simply by pressing the mic button and speaking into the microphone. Use it to adjust the volume, change channels or inputs, and control other basic TV functions. Search for a particular movie or actor just by saying the name. Google Assistant can also answer everyday questions and control connected smart home devices. The XBR-55A8G is also compatible with Amazon Alexa voice control assistants.