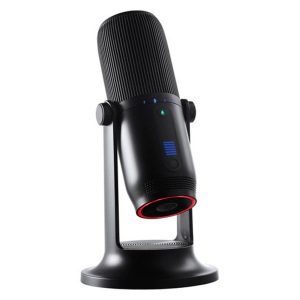 This monthly payment
does not include any applicable tax or interest.
Special Order -1 Left!

Use the Thronmax TMM2B to capture audio for your Twitch/YouTube/Snapchat/Podcast channel, Discord server, or your conference call with the THRONMAX MDrill One, a USB microphone that works with Mac, Windows, Linux, and PS4 platforms. The MDrill One can be used for game streams, podcasts, YouTube videos, conferencing, and more.

A USB Type-C port on the mic facilitates the connection with your computer or gaming system. You can monitor in real time through the mic itself using its 3.5mm headphone output. You’ll note controls for mode as well as a headphone volume control.

The Thronmax TMM2B offers four settings: omnidirectional, cardioid, bidirectional, and stereo. Omnidirectional picks up sound in a 360° pattern. Use it for conference calls, where more than one person needs to be picked up on a high-quality mic.

Cardioid captures what’s in front of the mic and minimizes audio capture from the back. Use it for recording yourself and minimizing the room sound. Bidirectional is great for interviews: you and a guest can sit opposite each other, with one speaking into the front of the mic and the other speaking into the back; sound is captured easily at the front and back but minimized on the sides.

Finally, stereo on the Thronmax TMM2B allows you to record things like ASMR, which benefit from two-channel capture. As you move around the microphone, your movement will be represented in the resulting recording; move to the left, and sound will drift to the left headphone when you listen back and vice versa.

The mic allows you to capture 16-bit audio at sample rates of 48 kHz. No drivers are necessary to make the product work with your operating system; it’s all plug-and play. The mic offers an integrated stand for placing it atop tables and desks.